When Should You Consider Hospice Care?

For many people, the idea of hospice care lasting more than a few days or weeks seems counterintuitive. That’s because all too often, patients are already in steep decline, if not actively dying, when they are admitted for care. Therefore, many people have been conditioned to think that hospice care, which is a Medicare benefit, is only for the last days of life. That is simply not true.

The key to improved quality of life lies in getting hospice care early.

As soon as a patient is given a life expectancy of six months or less, it is time to start receiving hospice care. Which agency provides the care is totally your choice. However, your doctor can assist in the referral process.

The goal of hospice care is to manage pain and symptoms of illness. This in turn helps relieve stress and anxiety. The interdisciplinary approach (doctor, registered nurse, nursing assistant, chaplain, social worker, and volunteer) provides for a whole-body approach that cares for the patient’s physical, mental and spiritual needs. The team, along with the patients and their loved ones, define the goals of care, thereby putting the patient’s wishes first.

Many patients respond exceptionally well to hospice care and gain improved quality of life – for themselves and their loved ones. This includes Lower Cape Fear LifeCare patient Mr. Jones (not his real name).

Mr. Jones lived alone. However, his daughter lived just across the street. The LCFL liaison met with Mr. Jones and his caregiver (his daughter) and developed a plan of care to minimize his CHF symptoms.

Mr. Jones’ family wanted to take him on a trip to the North Carolina mountains for four days. The entire family, including grandchildren and greatgrandchildren, enjoyed this special time together. They visited Grandfather Mountain’s Mile-High Swinging Bridge and enjoyed going out to dinner almost every night.

In November, Mr. Jones enjoyed a large family Thanksgiving dinner. At Christmas, he celebrated with family as they shared Christmas dinner and presents. He teased his family that he planned to give out cash as presents and those who did not come would forfeit their gift.

Mr. Jones’s symptoms were being well-managed, and he continued doing all the things he enjoyed. He spent time people-watching and visiting with friends on the benches outside JC Penney and Walmart. He called family members to see who was available to join him out for dinner on Friday or Saturday nights. He went with his son on Saturday mornings to Roberta’s Diner and to church on Sunday mornings. He drove his golf cart across the street to visit his daughter regularly.

The care team started weaning unnecessary medications in the fall of the following year but added medication to help him sleep. He was still able to live on his own.

Mr. Jones was readmitted to the hospital only once, and it had been nearly a year since his last admission. He received treatment as a comfort measure, and he was able to return home.

In October, the family returned to the mountains to a house purchased by his daughter after their last trip. They made a couple more trips until April, when Mr. Jones said he thought that would be his last trip. He said the trips had started to wear him out.

On July 19, he enjoyed a 93rd birthday celebration with his family. They had a backyard cookout party and he sat on the deck in the shade while he watched the kids play in the pool.

Within a few weeks, Mr. Jones started having breathing issues and was using oxygen at night. He started using a walker and needed help getting in and out of his golf cart. He exhibited signs of memory loss. A chest x-ray was needed, which he was able to get at home because he was on hospice.

As of Aug. 1, Mr. Jones was no longer able to live on his own. During the week, he became anxious and incontinent. His symptoms were treated, and he was made comfortable.

On Thursday, Aug. 4, he quit eating. On Friday, he became less responsive and showed symptoms of restlessness for the first time.

Saturday morning, he was unable to walk and was put into a hospital bed around lunchtime. By the end of the day, he was unresponsive. Family and friends joined him Sunday, Aug. 7, for a prayer vigil.

Mr. Jones died peacefully in the comfort of his own home, surrounded by family, at 1:19 a.m. on Aug. 8, almost two years after being admitted to Lower Cape Fear LifeCare for hospice care.

Mr. Jones’s family was grateful for his time in hospice care and that it had provided an improved quality of life for the whole family. They were glad they had gotten help early.

Don’t wait. Find out if hospice care is right for you or a loved one by taking our quiz.

If hospice care is not appropriate and you or a loved one are living with a serious or chronic illness and are currently receiving treatment for your illness, palliative care may be appropriate. Again, the time to start treatment is early, immediately following diagnosis. 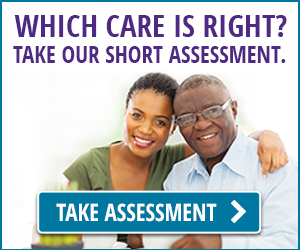